Re:       Unlawful Acts During the Obama Administration in Violations of 26 U.S.C. § 7214 of the Internal Revenue Code, the Virginia Constitutions and Code, the U.S. Constitution, and the Void Ab Initio Order Doctrine[1] by The U.S. Department of Justice-Tax Division, the Internal Revenue Service, the U.S. Tax Court, the U.S. Court of Appeals for the Fourth Circuit, and the District Court for the E.D. of Virginia.

Pursuant to 26 U.S.C. § 7214 Internal Revenue Code,[2] I write to respectfully request that the U.S. Department of Justice opposes Ms. Lois Lerner’s motion to seal her deposition seeking to avoid accountability for acts of malfeasance outside the scope of employment during the Obama Administration (See http://www.foxnews.com/politics/2017/11/20/lois-lerner-wants-irs-testimony-sealed-fearing-death-threats.html).

This request is to secure accountability generally and to assist my efforts challenging the retaliatory business conspiracy depriving me of my profession, reputation, right to employment, property and law practice as an independent attorney litigating against Eric Holder et al., during the Obama Administration for violation of the Art. VI of the Virginia Constitution, Va Code, U.S. Constitution, 26 U.S.C. § 7214, and the Void Ab Initio Order Doctrine [3] (See my United Nations Complaint, and my Petition to the Inter-American Commission on Human Rights (P-926-16) of the Organization of American States at http://www.isidororodriguez.com).

The evidence confirms that in furtherance of Eric Holder et al.’s retaliatory business conspiracy against me the U.S. Department of Justice Tax Division, the Internal Revenue Service, and the Art I U.S. Tax Court affirmed the declaring as “frivolous” and summarily striking of my litigation expenses for litigation challenging void orders, and issued a Deficiency Notice without any investigation or audit or other minimal factual predicates.  Thus, in violation of 26 U.S.C. § 7214 the Internal Revenue Service assessed taxes greater than allowed by law by denying me of my self-employment FY 2006 Schedule C 1040 business deductions for me and my wife (law partner) law office est. since 1987.

During the same period in furtherance of Holder et al.’s retaliatory business conspiracy, I was systematically denied access to an impartial court to challenge the retaliatory unlawful disbarment of me as a member of the bar of the United States Supreme Court, the United States Court of Appeal for the 2nd, 3rd, 4th, 11th, D.C. and Federal Circuits, the United States District Court for the E.D. of Virginia, and the U.S. Tax Court, by their use of legal sophistry to dishonestly apply the judicially crated doctrines of stare decisis and res judicata in violation of Article VI of the Virginia Constitution, the Void Ab Initio Orders Doctrine. The U.S. Tax Court also refused to comply with the mandate of 26 USC Section 7214.  Finally, in furtherance of Eric Holder et al.’s retaliatory business conspiracy unpublished Void Ab Initio Orders were issued to grant to Holder et al. “impunity” and absolute immunity for unlawful acts by enjoining and issuing a prior restraining on all future suits alleging violations of Art VI of the Virginia Constitution and Code  (See Isidoro Rodriguez v. Jane Doe et al., Case No. 3:12-cv-00663- the Hon. Dist. Judge John A. Gibney, E.D. VA Apr. 12, 2013at https://casetext.com/case/rodriguez-v-doe-5), and the Honorable Justices of the United States Court of Appeals for the Fourth Circuit No. 13-1638 at https://www.gpo.gov/fdsys/pkg/USCOURTS-ca4-13-01638/pdf/USCOURTS-ca4-13-01638-0.pdf).

The U.S. Department of Justice Tax Division, the Internal Revenue Service, and the Art I U.S. Tax Court, have acted arbitrarily without a rational foundation, excessive and harassment in violation of 26 U.S.C. 7214.  I challenge these unlawful acts during the Obama Administration because these unlawful acts aided and abetted Holder et al. retaliatory business conspiracy against me for my past litigation against “Deep State” of Washington D.C./Virginia Oligarchy of government attorneys, employees, and judges’ violation the Rule of Law.    Based on the above I respectfully request the U.S. Department of Justice file opposition to Ms. Lois Lerner’s motion.

shall be dismissed from office or discharged from employment and upon conviction thereof, shall be fined not more than $10,000, or imprisoned not more than 5 years, or both. The court may in its discretion award out of the fine so imposed an amount, not in excess of one-half thereof, for the use of the informer, if any, who shall be ascertained by the judgment of the court. The court also shall render judgment against the said officer or employee for the amount of damages sustained in favor of the party injured, to be collected by execution.

[3] I took an oath as a Vietnam Vet more than 52 years ago to defend the Constitution and Republic, “from all enemies, foreign and domestic.”  Surreally, my past 45 years as a federal litigator uncovered “domestic” enemies seeking to violate the limitation and prohibitions under the U.S. and Virginia Constitutions so to assume away accountability, See Martinez v. Lamagno and DEA, 515 U.S. 417 (1995) (I argued and won before the United States Supreme Court against Holder and DOJ’s surreal argument that a DEA agent acting negligently outside of the US was not personally liable for damages causing a car accident while driving drunk and having sex.  The Court reversed and remanded holding that there was to be an evidentiary hearing before a jury of the alleged acts outside scope of employment); Organization JD Ltda. v. Assist U.S. Attorney Arthur P. Hui and DOJ, 2nd Cir. No. 93-6019 and 96-6145 (1996) (I argued and won the right to hold accountable DOJ attorneys for violation of the Electronic Communications Privacy Act (1978); Lopez v. First Union, 129 F3rd. 1186 (11th Cir. 1997) (I argued and won the right to hold accountable DOJ and financial institution accountable for violation of the Right to Financial Privacy Act); and, Cooperativa Multiactiva de Empeados de Distribuidores de Drogas (Coopservir Ltda.” v. Newcomb, et al., D.C. Cir. No 99-5190, S Ct. No 99-1893 (2000) (A challenge as a prohibited bill of attainder by Pres. Clinton’s Executive Order use of the War Power Act).

This Veterans Day, as a support of your efforts to change the direction and size of federal government, I look upon my Dad’s World War I Marine Corps photo (attach) 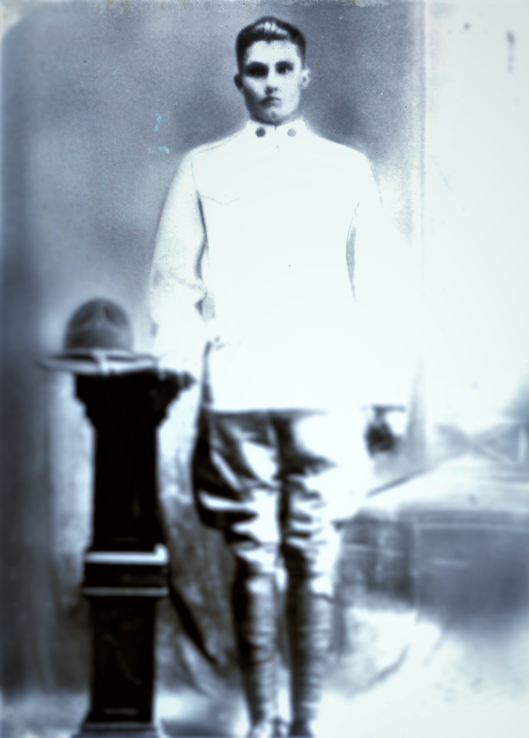 , to reflect and recall that based upon his talks to me of his love for our country and our flag, I took the oath in 1964 more than 53 years ago to defend the “constitution, against all enemies, foreign and domestic,” when I volunteered for the U.S. Marine Corps Reserve and the Regular U.S. Air Force.

Subsequently, based on my Dad’s teaching to me of honor and a moral code, during the past 42 years, I have conducted my professional life as an attorney in both government and the private sector positions consistent with that oath to protect our country.

However, much to my surprise and sadness I uncovered in my litigation practice to enforce constitutional rights, restrictions, limitations, and prohibitions, evidence of collusion of the U.S. Department of Justice with the Judicial Branch to usurp power by promulgating unlawful court rules and procedures by misusing the delegated authority from the U.S. Congress under the Rules Enabling Act (20 U.S.C. Sec. 2071), and the Judicial Conference of the United States (28 U.S.C. Sec. 331) (See http://www.liamsdad.org/others/isidoro.shtml).  These “domestic enemies” to our constitutional system, have:

In closing, I like most Veteran still abide by the oath we took and pledge allegiance and love both our Nation and the Flag.  Having lived and resided since 1965 in various parts of the USA, Asia, Europe, and South America, I know our Nation is the best.  Therefore, you and your Administration is appreciated.   Simper Fi!!

I follow my earlier letters, and petitions filed between 2009 to 2017 with each of you (See https://t.co/sLv7pz3zD5), to advise you that I recently filed a United Nations Complaint (see http://www.isidororodriguez.com; see also my petition filed in May 2016 with the Organization of American States, P-926-16),[1] due to your failure to take action in violation of your oath of office as my elected representative.

In summary, I repeatedly petitioned for an investigation to stop the Supreme Court of Virginia issuing court rules usurping the exclusive power of the Virginia General Assembly by assuming away and defying the restrictions, limitations, and prohibitions of Article VI, §§ 1, 5, and 7 of the Constitution of the Commonwealth of Virginia, VA Code §§ 54.1‑3909, 3915, and 3935, the 5th, 7th, and 14th Amendments to the United States Constitution, and the Void Ab Initio Order Doctrine, to deprive me of my right to due process and equal protection of the laws by systematically me denying access to an impartial court and trial by jury to secure accountability and damages for the business conspiracy to injure my business, reputation, profession, statutory property rights, right to employment and fundamental rights as a U.S. citizen in violation of  Va. Code § 18.2-499, 500.  However, in response to my litigation, the courts[2] disregarded the evidence and law to use legal sophistry to misuse the judicially created doctrine of stare decisis and res judicata in violation of the void ab initio orders to conceal and obfuscate the abuse of delegated rulemaking authority from both Congress and the General Assembly to assume away the restrictions. limitations and prohibitions of both Federal and State Constitutions.

Two questions yet to be answered are:

First, under what authority did the Supreme Court of Virginia promulgate court rules creating a centralized attorney discipline system under the Court’s control, create the Virginia State Bar Disciplinary Board (VSBDB) as a “kangaroo court,” appointing VSBDB members as “judges,” and deny access to an independent court, so to deprive citizens of advocates able and willing to hold government accountable for malfeasance?

Second, under what judicial authority and jurisdiction did the Federal Courts have to enjoin and grant “impunity” for the unlawful acts in violation of the U.S./VA Const. and VA Code?

The answers to these questions confirm the willful violations of the restrictions, limitations, and prohibitions under the 5th, 7th, and 14th Amend. to the U.S. Constitution, Art. VI of the Virginia Constitution, VA Code, and the Void Ab Initio Orders Doctrine, to permit the use of illegal court rules to deprive citizens access to an impartial court, trial by jury, and independent advocates willing to hold government employees accountable.

Because of NOVA General Assembly members failure, I am petitioning other authorities to seek an investigation to stop unlawful acts violating the restrictions, limitations, and prohibitions of the U.S. and Virginia Constitutions by void ab initio orders granting “impunity” and absolute immunity to Washington D.C. Federal/Virginia Government attorneys, employees, and judges.  My challenge to all of you your inaction permitting the unlawful acts and the grant of “impunity” is based upon President Theodore Roosevelt observation that “[n]o man is above the law and no man is below it: nor do we ask any man’s permission when we ask him to obey it.”

[1]  I will send upon request PDF files of the UN Complaint, Memorandum of Law, List of Void Ab Initio Orders and Exhibits, including the Void Ab Initio Order of the Hon. Dist. Judge John a. Gibney, Jur. E.D. VA, granting “impunity” and absolute immunity for unlawful violation of the U.S./Virginia Constitutions.